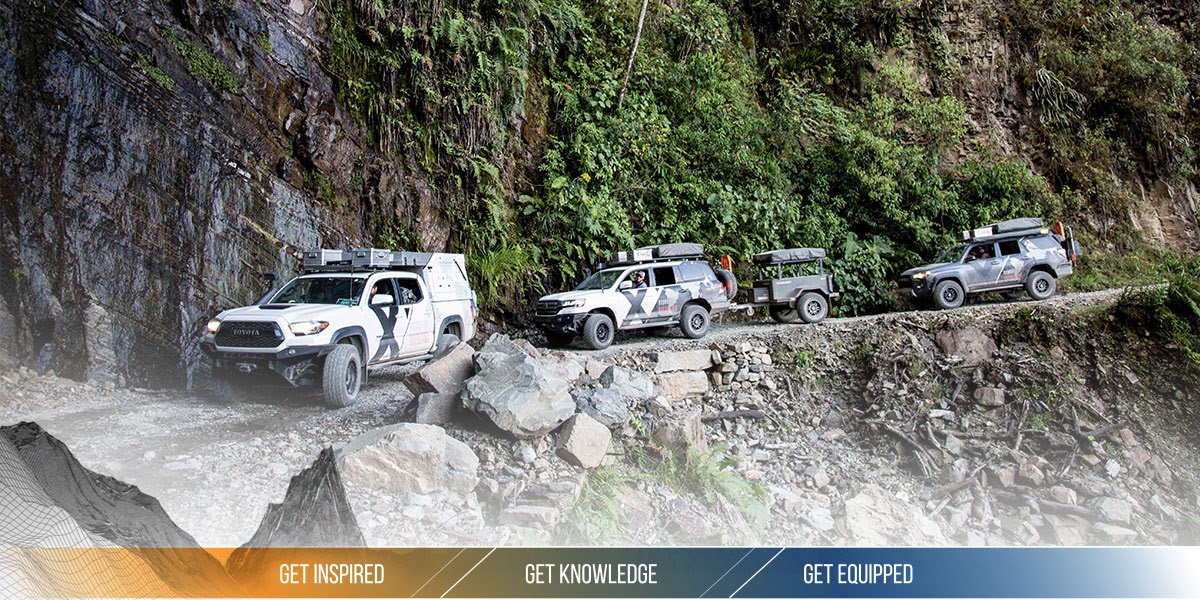 Aside from inquiries about our vehicle builds, the most common question people ask us is: “How do you deal with hygiene while overlanding?” This is a fair question! The reality is that in North America most of us have access to indoor plumbing or outhouses and don’t need to second guess where we’re going to [...]

There are few build modifications that make a vehicle look as rugged and expedition-ready as a snorkel. Also known as a ‘raised air intake’ this aftermarket addition may look cool, but it also serves some important functions. The main purpose of a snorkel is access to clean air. Most people associate the snorkel with water [...]

UPDATE: Our Jeep Gladiator has been SOLD! Thank you for your interest. A rare find! Built by Expedition Overland, this Jeep Gladiator has been used by the team since 2019 as an overlanding vehicle and on-the-road production rig. The setup includes features such as a PCOR Tray System, Long Range Automotive fuel tank, 37” tires, [...]

Knowing where you are and where you’re going is imperative to any overland adventure. This is where tracking devices and satellite communication technologies come into play in a big way. These systems can be easy to overlook, but it is important not to underestimate the importance of GPS and tracking devices because, to be frank, [...]

Exterior Lighting for Your Overland Vehicle

While your vehicle’s headlights are likely more than sufficient for global overland travel, there are undeniable benefits to adding good-quality exterior lights to your build. A well-lit camp is safer and more comfortable and will save you some headlamp batteries in the process! From rock lights to camp lights, there are a variety of options [...]

How To Choose the Right Wheels for Your Overland Vehicle

In addition to suspension, wheels and tires are the most important parts of any overland build. Tire size and design directly affects the performance of your vehicle, but fitting them properly requires the right wheel. There are so many options out there on the market, so where do you start? A great first step is [...]

Whether for expeditions or on an everyday basis, many amazing people come together to make Expedition Overland run. XO includes a core team that serves the creative, production, online store, and day-to-day administrative needs. Expedition teams vary—we assemble cast and crew based on each trip’s unique needs and challenges. Many folks have come and gone [...]

How Did Expedition Overland Start?

Expedition Overland began out of desperation. Throughout the years, many of you have asked us, "How did Expedition Overland start?" We're glad you asked! XO's founder, Clay, had traveled to Uganda for a volunteer film project in January of 2010, and upon return, he learned that six months of planned film work was canceled due to [...]

Do you ever feel the need to step up your photography game, but don’t know where to start? From smartphones to professional-level cameras, there are many options available, it just depends on what you would like to achieve with your camera!  It is said that the best travel camera is the one you have with [...]

At Expedition Overland, we’ve been building galleys and camp kitchens for more than 10 years. But that’s not where our journey started. In fact, Clay used his very first camp stove at the age of 13, a Swiss Sigg Multi-Fuel Stove, which he still uses today. Since then we’ve used many different stoves and tested [...]